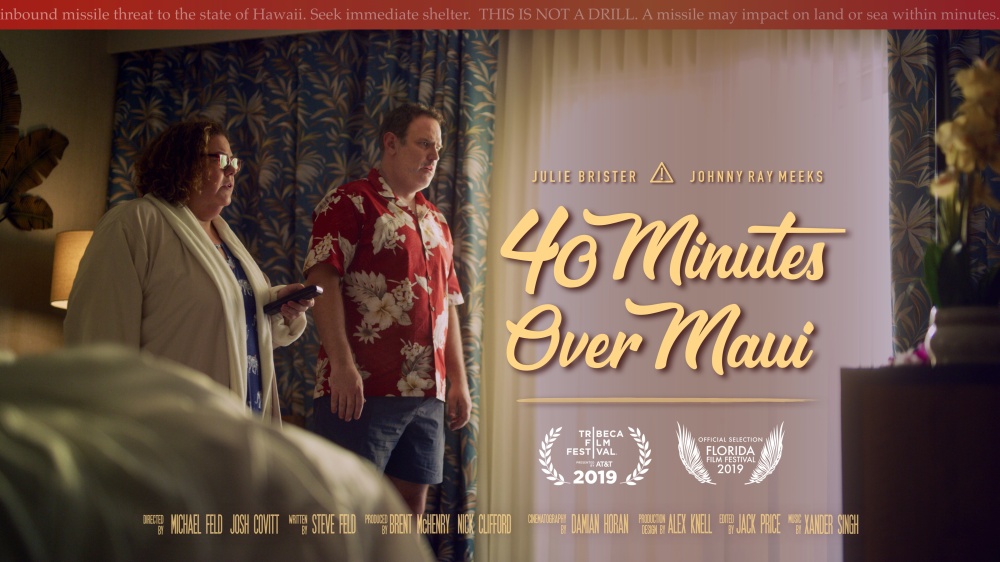 “What would you do if you only had one day to live?”. A question we’ve all been asked at some point. Would it be having a very relaxing day, eating all of your favourite things or just partying with friends and family? However, what would you choose if that day just became only 40 minutes? You might get some inspiration thanks to the latest short film from directors Josh Covitt and Michael Feld, “40 Minutes Over Maui”. Together with writer Steven Feld, they created an amusing, peculiar and clever movie.

You might not have heard about the Hawaiian missile crisis but that’s exactly where the inspiration for this film came from. Going on a relaxing beach holiday in Hawaii? It was what Penny (Julie Brister) and Larry (Johnny Ray Meeks) had in mind when they booked their fancy hotel. However, it doesn’t take long before their quiet and peaceful holiday turns into a nightmare. They both get a text about a missile alert which stated that within 40 minutes a missile will strike Maui. Their lives have become drastically shorter and so the couple wants to make the best of it. But what will they do?

40 Minutes Over Maui Trailer from Michael Feld on Vimeo.

That’s for you to find out in “40 Minutes Over Maui”. Whether you would do the same as them or something different, you will enjoy this movie. Because of the very recent events and the references to modern culture and politics, the film feels close to home, even if Hawaii is miles away. If you watch this film as a couple, the familiarity is even bigger. What confessions would you make to the ones you love? Would you have one final intimate moment? You can think about those questions while watching the movie with your partner.

What makes this movie so likeable are both Julie Brister (“Goliath”, “Review”) and Johnny Ray Meeks (“Crazy Ex-Girlfriend”, “Modern Family”). They portray a wonderful couple who loves each other until the day they die (which might be soon…) and who certainly wants to live life to the fullest. Brister, who reminds us a lot of Melissa McCarthy, as the calm, reflective and loving wife while Meeks is the more nervous, emotional and anxious partner who wants to fulfill his fantasies before he dies. Despite the fact a dark finite time is waiting for the couple, they keep on hoping, loving, smiling and joking and these emotions are being brought to life by the bright and light cinematography.

After winning awards at the Dam Short Film Festival and Sunscreen Film Festival and being selected for the LA Shorts and Tribeca Film Festival, it’s about time the film goes all around the world. Both directors Covitt and Feld made sure that their newest movie is one packed with humor, wittiness, and love, despite the seriousness of the topic.