We all know Stanley Tucci for his great performances in movies like Spotlight and Big Night but for his latest film he decided to take a seat in the director’s chair (the first time in 10 years after directing Blind Date in 2007) and to leave the acting to actors as great as him. With Final Portrait, he chose to immortalize the Swiss sculptor and painter Alberto Giacometti on the big screen and it resulted in a very amusing, witty and vibrant drama. 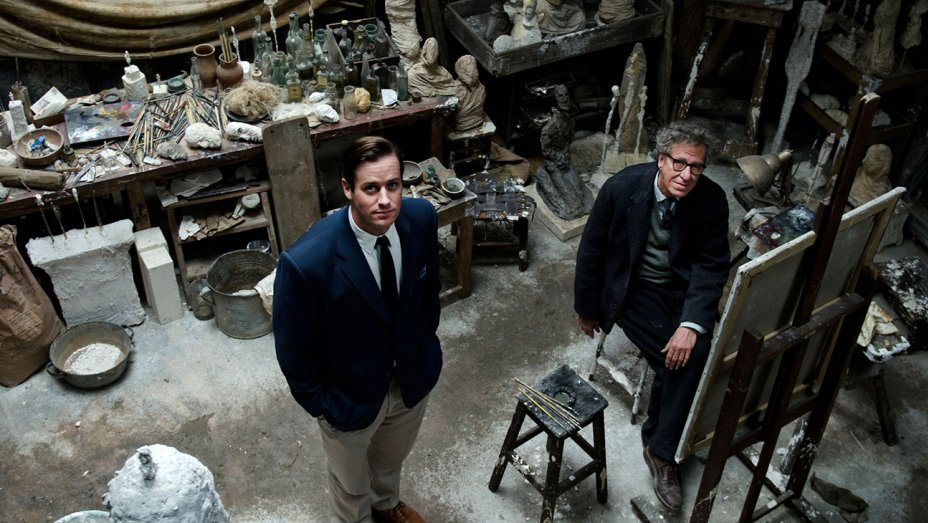 Final Portrait is based on a memoir by American writer James Lord (Arnie Hammer) and is set in 1964 in Paris. It all starts with Lord remembering an invitation that he got from the Swiss maestro Giacometti (Geoffrey Rush) to paint his portrait. After having doubt first because of the unfortunate timing and after being reinsured by Giacometti that it won’t take long, Lord decides to accept the invitation. However, it seems that his doubts might have been there for the right reason because it turns out that the portrait might take longer than first anticipated. Before he knows it, he spends day in day out in Giacometti’s studio, having a tete-a-tete with the maestro himself. One during which he gets to know two sides of Giacometti: The crazy, ingenious painter who’s trapped in his own atelier to seek perfection (but which he might never find) as well as the man of the world who lives his life the fullest with all the drank, drugs and sex (and even his own prostitute) involved. But the longer it lasts, the crazier it gets. Will Lord his portrait ever be finished or will he be stuck in Giacometti his world forever?

As you have noticed, the relationship Final Portrait is all about is the one between Alberto and James. The one between the crazy and bonkers painter, whose bohemian appearance doesn’t match the one of one the most famous and celebrated artists of his time, and the stylish and always polite (even when his plans are always delayed due to Alberto) American gentleman, who could perfectly play Don Draper in Mad Men. Both Rush and Hammer do a wonderful job in portraying the two men, both the physical appearance and the inner characteristic. The combo of the film’s score, created by Evan Lurie, and the French pop from back in the days create the perfect musical setting for that relationship and the movie in general.

However there are some small elements that could have been improved. The musical setting from this movie is great but the environment could have had a small upgrade. Instead of travelling to Paris, the filmmakers decided to create the location in a film studio in London which doesn’t do the French capital all the justice it deserves. The long quest of Giacometti takes always place in his own gallery and seeing Rush and Hammer in the same setting for almost the entire movie might have caused a little bit of repetition due to which the film feels a little bit monotonous. Although when Lord and Giacometti discover others part of ‘Paris’, the story becomes up-tempo and more interesting again. Especially when we got to learn more about the triangle relationship between Giacometti, his wife Annette (Sylvie Testud) and his prostitute Caroline (Clemence Poesy).

Despite of the little flaws, Stanley Tucci’s new movie is a pleasure for the eye and ears (we can even tolerate the swearwords from Rush). Thanks to the wonderful performances from all the actors, we got to know who the real Alberto Giacometti was. Get to know him yourself and go and watch Final Potrait during either one of the preview screenings or when it gets its UK release on the 18th of August.