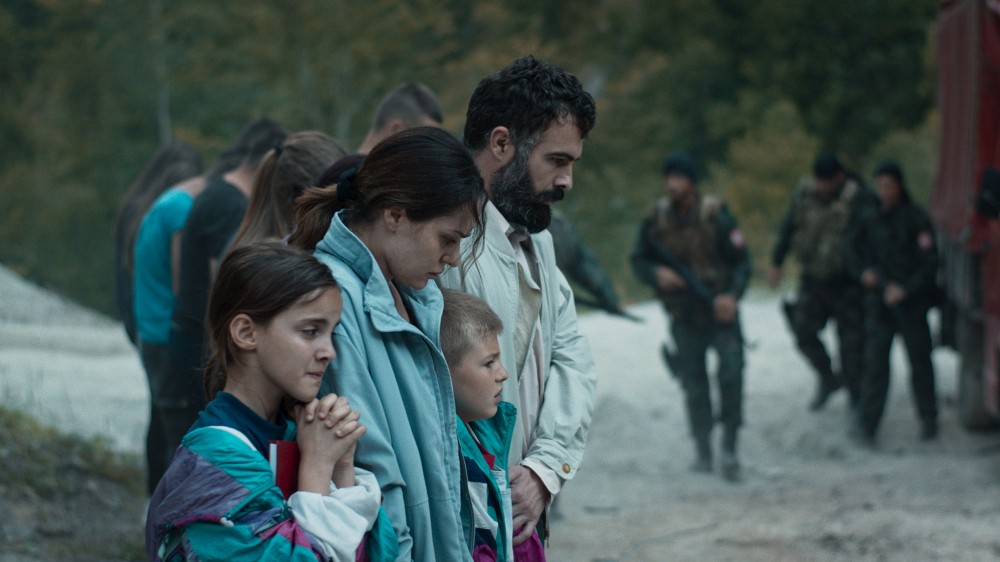 Kosovo 1999. The dangerous conflict between Serbian military, Serbian police forces and Kosovar Albanian forces sadly resulted in thousands of deaths and even more people forced to flee their homes. Families shattered, sadness, desperation, and insecurity. Director Erblin Nushi (Happy Moments, In Safe Hands) decided to bring this tough time alive again with Bini, an incredibly gripping drama that’s based on his own life.

Despite the heart-breaking topic, the film opens with rather happy scenes. Bini (Lurni Krasniqi), a six-year-old boy living in Kosovo, swinging while watching over the city and meeting new friends. However, it doesn’t take long for the true nature of the film to become visible. Bini his life takes a drastic turn when he, his sister (Artiola Hamdija) and mother (Fjolla Nushi) need to flee their home urgently to go and live with his aunt (Florentina Ademi). Arriving there, things are getting even worse. Their aunt is being tortured by Serbian military and sadly that same faith waits for Bini and his family, who are being strapped in an overloaded truck and transported away. What will the dangerous future hold for them? Will there be some light at the end of the pitch-black tunnel?

At the beginning, it’s stated that Bini is based on real-life events but during the movie, you seem to forget that because of the intriguing but sad story. You will get through all the emotions of the spectrum. During the first moments, you’re glad for the little boy that he can swing, meet friends and play with them. There are even some signs of first love. Happiness and gladness turns to heartache when it turns out that Bini’s life isn’t easy at all and it’s even sadder when it is at that young age. And when things are going from bad to worse, you will feel extremely sad, moved and heartbroken when Bini and his family are being carried away to an unknown dark future.

Just like his character, Krasniqi is still very young and because of that Bini is his first movie. However, it doesn’t look like that. His performance in incredibly moving, touching and delicate. He’s not the only one who makes with Bini his acting debut, Hamdija also makes her acting debut in. The brother-sister chemistry between her and Krasniqi is amazing, especially during the last few scenes. Just as any brother and sister, they fight but deep down there’s still family. Playing a mother for both is Nushi (Black), who, just like any great mother, will protect her children no matter what happens and how difficult times are for her. There also shines some light and love within this movie thanks to the lovely acting performance from Elena Shoshi who shares a young love with Bini.

Right before the end credits, you are confronted again with the fact that Bini is based on real life and after seeing all those emotions and the life Bini is going through, this movie sticks with you even more. The gripping story mixed with an emotional rollercoaster and wonderful and fascinating action performances makes from Bini a movie you should see.