You go away out of your house and want to earn some money by renting out your place. Where do you go to? Homestay, HomeAway or the most famous one Airbnb? Surely there are people who want to go on a holiday or a staycation but the only hotels they can find are very much overpriced and they’re too old to book a bunk bed in a “24 beds room” hostel. So win-win for everyone! However, after watching “Hearth” (original title: “Foyer”), the latest short film from director Sophie B Jacques (“Jalon”, “Le Trou-Normand”), you might think twice before renting out your house again.

Booking a rental home or a room was never this easy. Download the application, search and with just one click, your next holiday accommodation is secured. After renting her house to the lovely couple Alice (Marianne Farley) and Tom (Joël Marin), Emilie (Marilyn Castonguay) returns to her place and finds it exactly the way she left it: perfectly immaculate, everything still intact and there’s even a bottle of wine as a “Thank You” on the table. Wishing that every tenant was just like that! However, when she walks through the house, we see what really went going on when she was away. Trust us, it’s more sinister than you imagined, especially when a chainsaw, white sheets and again a bottle of wine are involved. 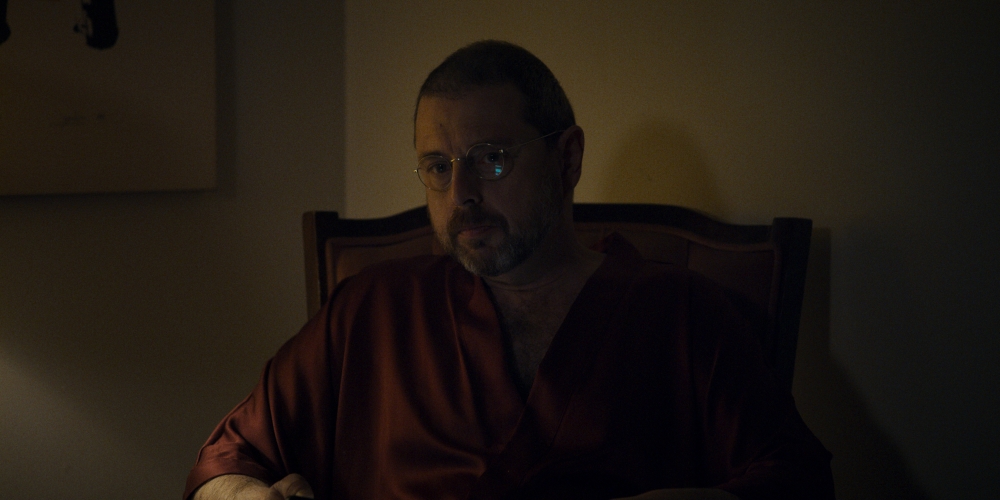 Just as in her previous works, “Hearth” is filled with suspense, discomfort and dark humor. At first, that might not seem the case. We see a happy woman returning home and finding it a perfect state after her guests left and when the voice over of Tom sets in telling that he had an amazing time and felt home instantly, everything sounds perfect. However, to make sure that we would stay captivated until the end of the film, Jacques decided to throw in her well-known filming assets.

As mentioned before, Tom is telling about his wonderful experience via a voice-over and apart from a very small dialogue, this is the way how the entire story is told. Emilie has no lines whatsoever (not even via a voice-over) so the perfect mimic and facial expressions were probably the most important trades Jacques and her team were looking for in the leading lady. With Castonguay (“Mon Boy”, “The Chosen Ones”), they chose the ideal one. She never overplays it and keeps her performance very low-key but at the same time, she knows how to fascinate us throughout the movie. Initially, it looks like Tom, played by the intriguing Joël Marin (“Mensonges”, “Les Simone”), is just an ordinary guy being on holiday with his wife but hey, every one of us has a dark(er) and edgy side and he’s absolutely no exception. We don’t see much of Alice, you might already guess why, but what we see is beautifully and delightfully portrayed by Marianne Farley (“The Anonymous Rudy S.”, “The Fall of Sparta”). Oh, and who’s that fourth guy turning up right at the end? Well, actor Guy Richer (“Vie d’ruelles”, “René Levesque – Le destin d’un chef”) will tell you.

Leading actress Farley was recently nominated with her latest short film “Marguerite” (which she directed and wrote) for an Oscar in the “Best Live Action Short Film”. It’s the combination of the stunning cinematography from Bernier and the music by Matthew Pusti (“Leaving Hope”, “Eidolon”) and Andy Walker that stood out in the film. Almost no music but just the delighted voice-over at the beginning and light colours and open spaces to create a relax and happy atmosphere but when the tables turn, so does the music and cinematography. Louder, darker and more sinister. The scenes where the two worlds (the way Emilie sees it and the darker version) come together are the best ones in the film, especially because of the editing.

After screenings at Cleveland International Film Festival and Vancouver International Women In Film Festival last month, there are sadly no other dates announced when this film would be screened. Certainly, it must be soon as Jacques delivers with “Hearth” a compelling, ambiguous and versatile short film.