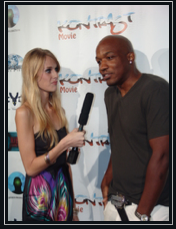 We discovered a new director/producer that is making waves in Hollywood – LazRael Lison. 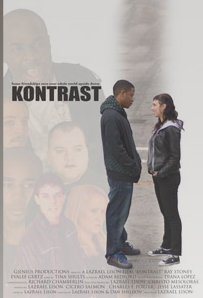 He moved to Hollywood several years ago to follow his dream of producing and directing Hollywood films and unlike many who make this journey his dreams are coming true.  Instead of waiting for others to make his dreams happen LazRael created ‘Gjenius Productions’ and in the last year alone produced 2 motion picture films ‘Kontrast’, ‘Rift’ and the new comedy series ‘Krazy Unleashed’.  Not only does he direct and produce his productions, he writes and creates them as well!  It just goes to show hard work pays off!

His latest film ‘Kontrast’, was premiered with a red carpet reception in LA recently.  ‘Just Celebrity’ got to see this heartfelt film and recommends it as ‘one to watch’.  ‘Kontrast’ is a powerful and intense contemporary drama about two people from different worlds.  Their adventures together take us on a journey through LA’s wildest cities and ultimately straight to the heart.

LazRael and his company Gjenius Productions have just  completed the horror ‘Rift’, which is scheduled to be released in 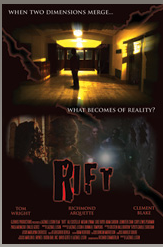 Theaters in spring of 2010.  So check back to find out more about ‘Rift’ and this talented director.

Remember you heard it first on Just Celebrity!