We managed to catch up with Director/Producer LazRael Lison during the holiday break to talk about his new film ‘Rift’ and how he took charge of his own destiny.

JC: Tell us about Rift.
LL: The film is based on true events.  In 2001 several college students were brutally murdered inside newly refurbished Town Creek Apartments, and to this day there is still no definite answer as to what really happened. Jennifer Campbell is a college student with aspirations of a journalistic career. Eager to prove herself, she instantly amasses lots of evidence that convinces her that Town Creek has been home to a cycle of violent killings. As she works her way through a town unwilling to come to grips with its past, she discovers at least two separate time periods in which unsuspecting victims were brutally murdered. When she forces her way into the building it doesn’t take long before she is given a crash history lesson on why it’s better to keep some secrets hidden and some names forgotten about.

JC: How did you create the film using a true story?
LL: Rift is a story that was brought to my attention several years ago, and i immediately felt it was a story that needed to be told to the world.

JC: How accurate is it to a true story?
LL: We tried to make this film as accurate as possible. Just like every true story, you have some embellishments at times but for the most part all the events within this movie are 100% true.

JC: What inspired  you to create Gjenius productions?
LL: I have been into writing, film and everything to do with the arts from as young as age 7. I started out writing short stories, music, Poetry, etc. When i moved to LA in 2001, I came with an entrepreneurial mind set. I wanted to be in charge of my destiny and from that I started Gjenius Productions. It was quite easy for me considering i have been doing all types of business ventures before.  With Gjenius Productions we could write, produce and continue to put out great edgy projects. 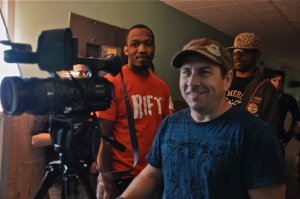 JC: What other productions have you completed?
LL: Currently, we have completely many projects underneath Gjenius from industrial videos, several music Videos that will launch soon, another feature Kontrast, and a Season 1 series of a comedy show entitled Krazy Unleashed which can be viewed on youtube.

JC: How did you move from comedy to serious drama?
LL: It was quite easy. We are all made up of so many dimensions. As a writer/director I try to avoid being put into a box. We want to tap into so many different things in this business, without losing site of the big picture which is making great films.

JC: Where can we see Rift?
LL: Currently Rift is being finalized in Post. This is going to be an amazing film. We have the Trailer available on Youtube to view, along with on our company site and the rift movie site. In a couple weeks the behind the scene video will also be available on youtube to view. You will see first hand how this story came to be and where it originated from.

JC: What Theatre’s will it be released into?
LL: Currently right now it will be a limited released started in LA beginning in April. It will begin in several theaters and grow from there. Hopefully around Halloween it can be a world wide release.

JC: What process do you used when directing?
LL: When I’m directing I try to make sure each actor understands he or she character before we get to the set. I believe in digging deeply within each character and telling the story. I believe that is when the character unfolds. Once i am on set I love to just tell a great story and get the necessary coverage needed to properly tell the story.

JC: If you could employ any actor who would it be?
LL: Omar Epps. I have always been a huge fan. I find him to be a great actor, who just hasn’t landed  his ideal role yet. I would like to be that director who gives it to him. I would like to write a complex edgy script specifically for him.

JC: How do you use viral marketing to promote your company?
LL: It’s amazing the wonders of the Internet today. We have have been fortunate to create and maintain great relationships in this business. We take care of our people and thru that we are able to keep putting out great product whether its thru our trailers, promotions or with our comedy series. We just try to stay busy and over the internet is the best way to keep your face out there.

We look forward to seeing more of this inspiring Directors work soon.