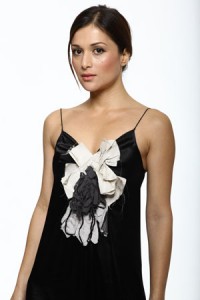 Daphne Alexander not only has beautiful film star looks, she has an adept versatility to play an array of nationalities from a Mexican Legal intern in Roman Polanskis’s award-winning film ‘The Ghost Writer’ to an Iraqi novelist in the brand new film ‘Meso Café’. This Chameleon like talent lead Daphne to star in ‘The Palace’, a wonderful film inspired by the Turkish invasion of Cyprus, directed by Anthony Maras.

The Palace’ is based in Cyprus in1974. A Cypriot family flees advancing Turkish forces and takes refuge in an abandoned Ottoman-era palace. When a young Turkish Cypriot conscript comes face to face with the family in hiding, he is forced to confront the brutal reality of war and his role in it. The story was inspired by true events that took place during the 1974 invasion of Cyprus, including the confession (later retracted) of a now prominent actor, who detailed on live television how as a 19 year old conscript, he had killed 10 unarmed people on the orders of his superiors.

Daphne stars as a young mother who in the midst of the chaos of war is faced with an impossible decision in life-threatening circumstances.Daphne’s parents actually lived through this war, so filming this was close to her heart.

Daphne was born in beautiful Cyprus growing up between Cyprus and London. After reading law at Oxford, Daphne followed her dreams and trained at prestigious London Academy of Dramatic Art. On graduation she immediately starred in one of the UK’s high rating dramas BBC’s ‘Casualty’, as well as ‘The Amazing Mrs. Pritchard’, ‘House of Saddam’ and blockbusters like ‘The Fourth Kind’ and ‘The Ghost Writer. With credits like these, it is no wonder her work in ‘The Palace’ has helped win accolades like the Audience Award at Adelaide Film Festival, Best Short Film at Sydney Film Festival and Best Short Film at Melbourne Film Festival.