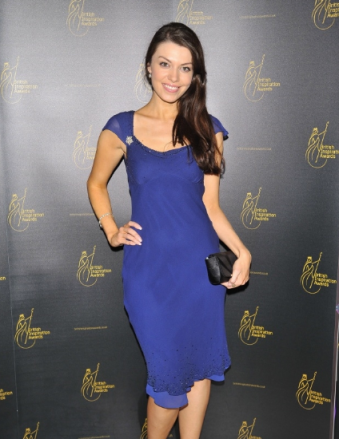 London born actress Lucy Drive is no stranger to our screens and already has a wealth of credits including the popular dramas The Borgias and BBC’s Doctors.  Now she is back on the big screen starring alongside Terry Stone as Erica in the Outside Bet, which is currently in cinemas across the UK.

Outside Bet is set against the turbulent mid 80’s of money, privatization, unions and dramatic media evolution: A life-long group of friends find themselves at the bad end of a redundancy pay-out and invest their savings into a racehorse, hoping that one final race can turn their fortunes around.  Erica (Lucy Drive) works at the citizens advice bureau where she meets Johnny (Terry Stone) and after a short affair Erica sets her sights doing whatever she can to get her man.

This stunning beauty wasn’t always an actress, she started her career as a teaching assistant – but the acting bug soon bit and she soon transitioned into the career she loves.  Her good looks and talent have made Lucy a fan favourite.    Adept at drama and comedy Lucy played Jamie Foreman’s daughter Mamon, in physiological Thriller Hard Shoulder and enjoyed giving a comical performance as Erica in Outside Bet.

Lucy shone in The Borgias as Carina alongside David Oakes and in BBC’s high rating medical drama Doctors as beauty therapist Chloe Moulton.  This stunning actress is set to light up our screens again in her latest features Cold Shoulder and The Law of One.