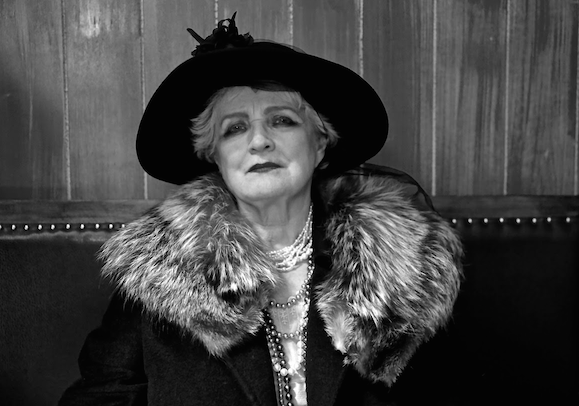 Absinthe plays homage to the beautiful black and white old Hollywood stories and shares actual quotes from legends including James Brown, Janis Joplin, Frida Khalo and Marilyn Monroe. This avant-garde film stars two of France’s most beloved actresses Oscar-nominee Marie-Christine Barrault and Cesar-nominee Brigitte Fossey, as well as American actor Larry Cech. The film was directed by Michelle Figlarz and produced by Larry Cech, Raul Torres and Monica Cooper.
Absinthe shares the story of Simon, a spiritually lost man, who struggles to live in the past or move forward with his dream of re-igniting his long buried artistic passions. This imaginative piece is shot in color and black & white and is influenced by the work of the famed 1930’s French photographer Brassaï, who was known as “The Eye of Paris”.
Larry Cech produced and starred in Absinthe. This talented actor’s previous credits include Washington Blvd., which screened at The Marche du Film at the 67th Festival du Cannes. Alongside Larry, stars Brigette Fossey (Cinema Paradiso) and Marie-Christine Barrault (Cousin Cousine). Also appearing in the film is Raul Torres (Wonderstruck).
Absinthe was the only short given permission to screen at The Marche du Film at the 70th Cannes Film Festival. The film screened at the DTLA Film Festival, in Los Angeles, and opened for the 25th Anniversary Screening of Robert Altman’s The Player.

We caught up with Larry Cech to talk about this wonderful film.

What sparked the initial idea for Absinthe?

A group of us met at The Cannes Film Festival and decided to work together on what we hoped to be a fun and artistic project. While back in Paris I pitched an idea to our writer about an American businessman that meets three beautiful angels at the Eiffel Tower.

Why was Absinthe the perfect title for your short?

It has a mystery to it and a long history of inspiring creativity in artists from the early 1900’s including Toulouse Lautrec who is one of the characters in the film.

Were there any challenges you encountered while making this film? And if you did, how did you overcome them?

Our Line Producer in France, Edward Flaherty was key to keeping us together. Ed had 40+ years of film production under his belt and knew Paris like the back of his hand. He helped us to bring all the local pieces together. Shooting in a new location always has some challenges and shooting out of the country is amplified especially dealing with language barriers and exchange rates. But with our very professional crew and the guidance of our Line Producer we navigated around any bumps in the road.

What is the message you want people to take away from this film?

To always go after your dreams. If you have a long-buried passion inside of you let it out. You will be better for it.

What projects are coming up next for you?

Raul and I have two features in development including a project called “The Border” which tells the story of two border guards on either side of the US/Mexico Border. The other is a time-travel thriller that will be shot in Switzerland called “Entanglement”.

I noticed that at the beginning of the short, there is colour in the picture, but when the main character is older, the picture goes black and white. What does that symbolize?

The use of black and white symbolize the lack of creativity and passion in older Simon’s personal life. The color comes back at the end when he realizes what he needs to do to be happy again.

How important was it for you to film the short in France?

There was no other location as creativity abounds on every corner.  We hope the audience feels like they not only traveled to Paris but also back in time.