Absinthe. It gained its worldwide fame as the drink that probably drove the famous painter Van Gogh mad and thanks to which he also cut his own ear off. The very green drink is also referred to as la Fee Verte, which is at the same time the title of a great Kasabian song. “Oh green fairy what you done to me! I see Lucy in the sky! Telling me I’m high”. Yep, we all know what songwriter Serge Pizzorno, also Kasabian guitarist, was referring to. It also seems that the Mexican-American producer Paul Torres (Madam Secretary, The Blacklist) knows all about this green drink. He even dedicated his latest work Absinthe to it and just like the side effects the drink causes, the film is a very odd one. But odd isn’t always bad. 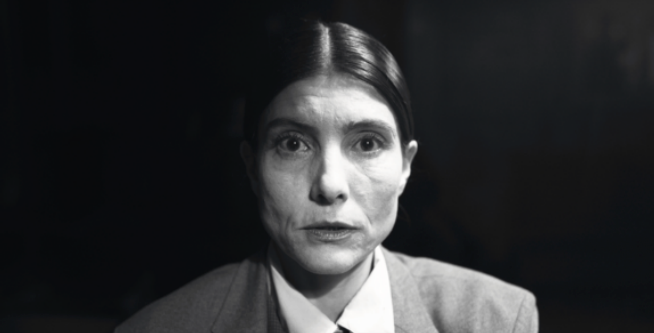 This French-speaking movie starts which some flashbacks of the leading character Simon (Larry Cech) who’s looking back at his youth during in which he spent most of the time with his grandmother (Brigitte Fossey) in Paris. Some many years later and after the death of his grandma, Simon decides to visit Paris again. Lost in life, stuck in his past and trouble looking forward to his future, Simon tries to resolve his problem by attending a mass in the local church. The preacher, who seems to us either a black version of Elvis or one of Tom Jones, preaches about loving each other and giving to each other. When Simon determines to follow that advice and give money to a homeless man outside the church, the man gives Simon something in return. A card of a bar named Au Cadavre Ex Qu es. Arrived at the bar, Simon has the feeling that he has already been to the place. When he orders absinth, his trip to Paris as well as the film goes into a spiral of weirdness, anomaly and hallucinations.

You probably already guessed it. Absinthe isn’t a movie like any other. We had to admit that we struggled with writing a review because of all the things happening and the illusions without giving away too much of the ending. It wasn’t easy for us to write but certainly not for the actors to play it. Or at least it seems like that. Thanks to the fine acting of Larry Cech (Washington Blvd. and also producer of Absinthe) we got to know the struggles and battles Simon is going through while Brigitte Fossey (A Family Secret, Un et un font six) is excellent as the grandma, who’s taking Simon’s hand to accompany him during his past and maybe also during his future. We also see Marie-Christine Barrault (A Family Secret, Profilage) as Bijou who’s name really fits the character. Raul Torres also takes on a role in his own movie as the bartender who starts Simon in his funky trip.

Do you want to experience something that you haven’t had before? Then we can assure you that Absinthe is the movie you should check out. An unusual trip through Paris with wonderful performance of some award winning actors. That’s exactly what the newest work from Larry Cech and Raul Torres is and you should watch it.