Having a loving husband/wife with whom you’re together for a long time and with whom you want to raise your own family. After living together for a few years, you’re thinking about having a child and when that life-changing news arrives that you’re expecting one, life couldn’t be more marvellous. However, sadly what you’ve been given can be taken away as well. Writer-director Edward Japp (“Wasteland”) and his co-writers, Antonia Desplat (“Operation Finale”, “Rise of a Star”) and Jordan Waller (“Darkest Hour”, “Victoria”) know that like no other. Based on the real-life experience of their close family members, they wrote and produced an exceptionally authentic, heart-breaking and impressive short film.

Just moved into a wonderful house, the lovely couple Alice (Antonia Desplat) and Robert (Liam McMahon) are expecting their first child. Totally over the moon, they’re getting ready to welcome him/her with open arms by buying the nicest clothes and decorating the baby room in the prettiest way. After giving birth, the lives have changed in more than one way. While Robert is extremely busy at work, the couple decides to ask Maria (Niamh McGrady) for help. Being a new mother, Alice isn’t very fond of the help and becomes overprotective of her baby. However, is the overprotection the reason why almost no one has seen her child or is something else going on?

Having a baby is probably one of the best feelings in the world but despite the euphoria and joyfulness there can also be the doubts, the insecurity and possible also a lot of stress (maybe even too much). “Held for a moment” focusses on both sides of the emotional spectrum that comes along with pregnancy. Due to a traumatic and devastating event, the bliss, optimism, and hope that we saw at the beginning of the short film turn into dark thoughts, vulnerability, and anxiety. Director Edward Japp and his team assured that that change was represented in the best way possible. 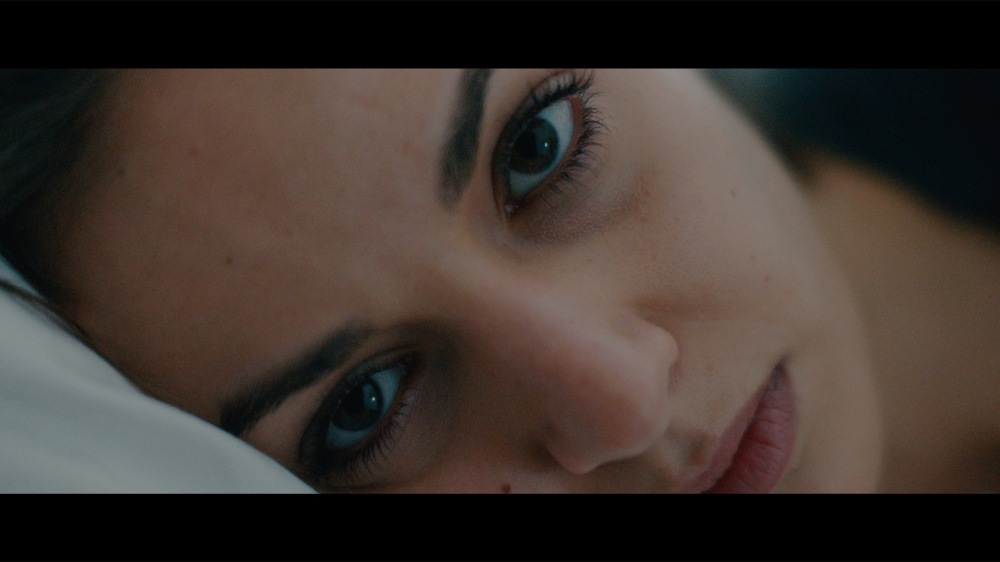 One of the elements is the personality the actors’ trio gives to each of their characters. Desplat is without a doubt the star of “Held for a moment”. Together with Japp, she wrote this film and it’s undoubtedly clear that her experience as the writer has lifted her acting performance to a higher level. She brings the light, the contentment, and motherhood but also the sadness, depression, and agony delightful and elegant to the screen as the fragile new mother. Opposite her, we see the fine and chic McMahon (“Coronation Street”, ” ’71”) who portrays the supportive, affectionate but also the straightforward husband in an exquisite way. There’s not a lot of conversation between the two of them but even during the silent scenes, their body language speaks for itself. While Maria is helping the couple out at her best capacity, Alice still sees her as the intruder but McGrady (“Niamh McGrady”, “Holby City”) makes sure that she’s everything but that. McGrady puts down a wonderful performance as the helpful, caring, kind and patient assistant.

A new life in the family means a new bright light for Alice and Robert but also darkness and suffering and no better way to display that on screen than the use of bright and dark colours. Christmas is the seasons of giving, family and… light and so it’s no wonder that that festive period is being included in this film. From the sunny and glittering summer days to the sparkling Christmas lights to the dark winter days. That’s exactly how the mood runs through the movie. From the ecstatic feeling of becoming proud parents to the long-awaited birth but sadly in this case also the dreadful event

You could have guessed that Antonia Desplat is the daughter of the two-time Academy Award winner Alexandre Desplat, who created stunning scores for films such as “The Grand Budapest Hotel” and “The Shape of Water”, and so it was probably obvious from the start that he would compose the music for this short film as well. He might not win awards for this film but the score really underlines every feeling (how happy or sad) and every emotion that characters are going through. The different elements of the film are combined in a delightful and lovely way.

During its victory run, the film won the Lift-Off Filmmaker showcase and was awarded with multiple prizes at the 2019 Independent Film Awards (Best British Short, Best First Time Director and Best Actress). It’s not surprising that such an intimate and personal film, which combines a story based on brutal real-life experiences, intriguing, and a touching film score, was loved by both critics and film fans. Do you want to see what the well-deserved fuss is all about? Then check out “Held for a moment” during the London Independent Film Festival on the 13th of April!