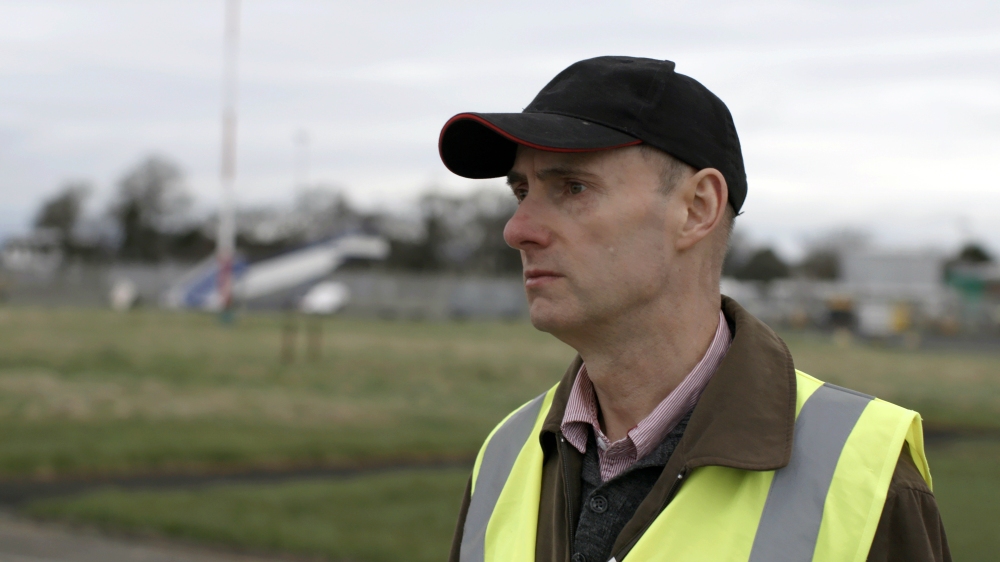 The school holiday is over but maybe you’re already looking forward to the next time you’re going on a well-deserved break. What are you planning on doing? Going on a trip to the seaside by car, taking a train to a small picturesque village near you or do you take the plane to go to a much further destination? You might want to skip that latest option, especially after watching “Everybody Flies”, the newest work from directors/writers Tristan Loraine (“A Dark Reflection”, “Shady Lady”) and Beth Moran (“Missing a Note”, “One Day Next Week”. This eye-opening, real-life and rare documentary will change your opinions about setting foot on an airplane.

“When you’re a passenger on an airplane, where does the air you breath come from?”. That’s the question Loraine asks people he encounters. As a former Airline Captain for British Airways, he should know the answer to that but even he can’t answer it with a 100% certainty. All he knows is that the air in an aircraft smells terrible. After receiving a telephone call from a fellow pilot, who got sick due to contaminated air, he also gets information that the air might even be toxic. With that question and knowledge in mind, he starts his investigation. One that would keep him going for the last eighteen years. He speaks to the pilots, stewardesses, passengers, and politicians and they all agree on it: the air in an airplane is more dangerous, unhealthy and harmful than they originally thought. After receiving more medical results, blood test developments and other disturbed health outcomes, their conclusion is fully confirmed. Little did they know that it’s now becoming a global phenomenon. If the air is so unsafe, poisonous and painful, then why has nothing been done to solve this deadly problem? Is it just because we know not a lot about it, the (paid) consultants (who are compared to the same consultants in the tobacco industry), the airline industry or is there more going on than what meets the eye?

Everybody Flies – Film Trailer from Fact Not Fiction Films on Vimeo.

Saying that Loraine was able to gather a diverse range of information and data is a big understatement. From testimonies of stewardesses from all over the world to officials documents about important blood tests and from health evaluations from different pilots to news items about this (unknown) topic. As a pilot who flew the last time in official occupation in March 2006, Loraine himself is speaking of the first-hand experience during the voice-over used for this documentary. We’re certain that the questions he asks himself are also (indirect) ask to every one of us. While he was investigating this, the flight crew became aware of him and his research and start contacting him. Together they found out whether the crew was being exposed to the toxic air. If so, then their testimony could finally be the breakthrough in the case they need. There are even confessions from people who sadly lost their loved ones due to the toxic air.

“Everybody Flies” is about to get its world premiere during the Raindance Film Festival and it’s incredibly important that a documentary like this sees the light of day. ‘Is the air we breathe on a plane safe?’ is a question you might never consider asking but pretty sure you will do now every time you step onto an aircraft. Before you do that, check out this feature. You will witness never-before-seen documentation, scientific evidence, and personal testimonies about a controversial topic we didn’t know even existed.