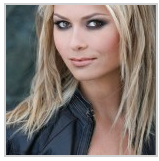 We caught up with Slovakian born actress Simona Brhlikova to talk about her new flicks ‘Gallowwalker’ with Wesley Snipes and ‘Madoff: Made off with America’.  Gentleman as well as talented we have to say it doesn’t hurt that this wonderful lady is also easy on the eye.  We find out that this beautiful lady has a spiritual side and yes you heard it here in Just Celebrity, she is single!

JC: Having travelled all over the world, which is your favorite place?

SB: I’m still working on that one… But certainly amoungst my favorites are Thailans, Rome, Prague and a lot of Africa. Even though I gotta say – there’s nothing like summer in my Grandma’s garden with all my animals in Slovakia.

JC: We heard you speak 7 languages, what are they and what language do you think in?

SB:  English, French, Czech, Italian, Slovak, Russian, polish and of course body language 😉 I think 98% of the time in English, when I travel to certain countries for a longer period of time like France –  I start mixing my thoughts in French, in Slovakia in Slovak and of course in Italy I pick up all the gestures on top of it.

JC: What was it like working with Wesley Snipes in Gallowwalker?

SB: It was fun and inspirational.  He’s a great guy, generous actor and a beautifully spiritual Human Being.  I think he is a really talented actor with a lot of soul.

JC: Tell us about your role as Kisscut with Wesley in Gallowwalker?

SB: Kisscut is a badass villainess that revels in handling guns, knives, daggers and rifles.  She’s a skilled assassin, loyal to her gang who is not afraid to take care of her dirty job.

JC: Will there be a sequel?

SB: If you’ll all go see it, it sure will 😉   But it’s definitely up on the horizon.  Keep your eyes on my IMDB page for updates.

JC: What kind of character does Wesley play?

SB: Sharp-Shooter, Amman, in search of justice – going after those who have crossed him in the past.

JC: If you could play any role, what would it be?

JC: If you could work with any actor, who would it be?

JC: What made you want to act?

SB: Self Expression, Interest in human mind and the challenge to inhabit various characters.

JC: Have you ever thought of another career and if so what would it be?

SB: I used to make it make my own clothes since I was little, anything from knitting sweaters to sewing and customizing all of my outfits.  So probably a fashion designer.  I’m also crazy about animals and used to assist my local Vet  – so either a Vet or i’d run an animal shelter; or maybe i’d be a Zulu warrior.

JC: 12: Tell us about your upcoming role in Madoff

SB: I play Ursula a.k.a. Mrs X, a fiancee of Bernie’s Russian business partner who plays a pivotal role in bringing the Madoff scandal to public.

JC: What kind of character do you play?

SB: She is the mastermind who orchestrates the media revelation of Bernie’s scheming.  She gets betrayed by those closest to her… and you know – there’s nothing like a scorned woman. 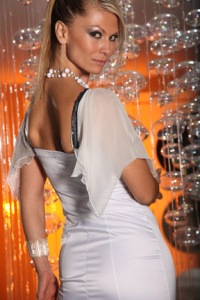 JC: Do you think blondes have more fun?

SB: Ha Ha.  I’ve had fun being Blonde or Brunette – think it depends on who you play with.

JC: What you like about living in Los Angeles the most?

SB: Coming from London – it’s gotta be 360 days of sunshine!  I live of it’s energy and light so again: Sun, Sun, Sun… I also love the outdoor lifestyle, environmental diversity – I can go hiking in the morning and watch the sunset on the beach.

SB: I’d wish I had a magic stick and add a few extra hours into my days.

JC: Where would you like to be in 5 years?

SB: I’d like to be sitting in Piazza Navona in Rome with all the guys from questions 9, sipping a chilled glass of Gavi and listening to each others stories.