Set in contemporary east London, Montana is a high octane tale of betrayal, redemption and honour, charting the unlikely bond between black teenage drugs courier Montana and Dimitrije an ex-Bosnian commando who is hell-bent on revenge against Montana’s boss, Lazurus a Serbian gangster and drug lord.  Moore plays Stephen Phelps, a tough, cynical, chain-smoking, coke-snorting detective on a dangerous patch of east London run by a Serbian gangster and Phelps’ loyalties lie on the wrong side of the law.

Director Mo Ali’s first feature Shank became a British cult classic and his second feature Montana is his biggest budget yet of $2.5m.

Just Celebrity got the chance to talk to this wonderful actor about the new film.

JC. Thank you for taking the time to chat with us here at Just Celebrity, we would like to start by asking you to tell us a bit about the film ‘Montana’ that you are starring in?

BM: Montana is set on the streets of London’s East End, where a former Serbian commando and a 14 year old bot plot revenge against a powerful crime lord and his ruthless lieutenants. As our hero’s prepare to take their enemies the boy is mentioned in the dark arts of assassination and learns the true meaning of friendship, honour and respect.

JC: What was it like filming a long side other well-respected actors such as Ashley Walters, Adam Deacon and Michelle Fairley?

BM: Adam and Ashley, were very friendly and welcoming. Both have a big following and have worked with each other before so were friends, so I was bit nervous as to how they would gel with me, but they were very warm and very focused on achieving the best out of each scene, which was great. They have a great balance, so although they have a laugh and have banter, they do also know when to get their head in the game. Ashley also got me onto twitter which was…interesting! They are both really cool guys.

Michelle was a bit different, she came in, later on in the shoot. I was originally quite intimidated by her as she is very popular from her role in Games of Throwns, and she had just slit a little girls throat in the film! At first she didn’t really speak to me because she didn’t want to get too friendly with me, as we play characters that hate each other, and she wanted that to come across and honestly as possible in the film. But after filming was over, we became good friends and she is such a lovely lady!

JC: Can you tell us a bit about your character Stephen Phelps’ and his input in the film?

BM: DC Stephen Phelps is a violent, degenerate, misogynistic, nasty piece of work! He’s a corrupted copper who bends the law for the local cartel, and enjoys shaking down the drug dealers of Winchester estate. Phelps’ whole Eco system has been upset by the introduction of the Serbian soldier Dimitri killing drug dealers as well as Phelps’ superior officer DCI jones (Michelle Farley) knows he’s up to something and has being drafted in to put pressure on him to clean up the mess and find Montana and Dimitri.

JC: Did you face any challenges when filming?

BM: The Cold was a massive challenge! We filmed in February and it was the coldest February we’ve had in many years. There was a scene we had to do in a car park it was so cold, we were freezing our heads off! Couldn’t feel our hands or stay warm at all. Our backs were locked up from the cold, frozen to the bone, but then someone would shoot ‘action!’ and in the blink of an eye we would have to get into character and act as natural as possible.

Another challenge I would say I faced was the fact that it’s such an action based film. It was the first time I was taught how to shoot a gun and how to be shot, which was lots of fun. As it’s a low budget film we didn’t have the 6 weeks training ahead of shoots, our fighting choreography and gun training was done very quickly – we had to be fast learners!

I would also say the shooting schedule was a challenge, it’s a big film for not a lot of money at all. So the filming time was very tight and we only really had one take to get it right! Surprisingly though, playing a degenerate, nasty, corrupt misogynistic, coke addict police officer was worryingly easy!

JC: What made you want to get involved in Mo Ali’s ‘Montana’?

BM: When I was introduced to Mo we hit it off very quickly, he’s very assured and confident with great ideas. As well as being a major fan of British films, After reading the script thought it was genius. What’s not to love, It’s like Leon meets Karate Kid…set in the urban parts of London, where I grew up. I really thought the ambition of the film was unique – an urban action film, with a father son story at the core. 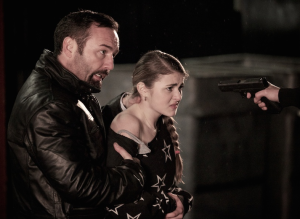 JC: Do you have any funny stories to share from Set?

BM: I was shooting car park scene with Rocky Marshal and the crew told us to drive the car to level 3. As we arrived on level 3 we couldn’t see anyone around and was amazed at how hidden away we thought this camera crew was, so we began leaving the car park only to find out soon enough we were on the wrong floor! It was a little embarrassing!

JC: If you could star in any Film or TV series what would it be?

BM: Well I’m not pretty enough or tall enough to play James Bond – which let’s face it, is a secret fantasy of most men, so the second best thing would be to play a bond villain!

More realistically…I would love to star in the contemporary Oliver twist directed by Carol Reed. The ideal role would be starring as Ben Sikes (Who was played by Oliver Reed), he’s a very dark, layered, angry, intimidating character that I would love to get my hands into! Also for some strange reason…I would also like to play a transvestite! I think it would be fun to dress up in ladies clothes for a few weeks! It would be a laugh.

JC: If you could choose one actor you would really like to work with, who would it be?

BM: I would love to have worked with Paul Newman, I admire him both as an actor and a human. He did so much for both the industry as well as all his charity work. I’ve always found in his interviews he was incredibly instinctive but warm, and have always been drawn to him throughout his career. I haven’t seen a more charismatic actor since and it would have been an honour to work along side him, if I ever had the chance!

JC: What piece of advice would you give to aspiring actors?

BM: Work at all costs! When you are just starting out, hunt down the smaller budget films and plays, because that’s where you have the chance to really experience the acting world and learn and improve. As valuable as drama school can be, first hand experience will benefit you more. My game plan was to never ask for a penny but use it as practice and get facetime.

JC: What can we expect to see from you next?

I’ve also just finished filming ‘Long Time Coming’ which basicallu shows the war between two rival gangter families. I’m really excited about this project as it’s my first lead role, and I’m starring along side Freema Agyeman from Dr Who.

Montana is due to be released by E1 on 12th December this year.