Just Celebrity was lucky enough to get an interview with Check Please’s writer and director  Daniel Sorochkin, who’s film has been selected as ‘short of the week’. 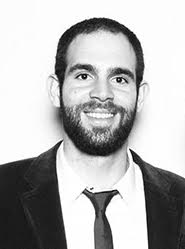 JC:How did you end up getting a career in film?

I started making short comedic film in my military unit in the Israeli Defense Forces. It made me fall in love with the whole process of filmmaking. My films were screened at my unit’s conventions, in a theater for the hundreds of soldiers in my unit. It was really satisfying to hear all the laughter during the screenings and the positive reactions of soldiers after. The soldiers used to love my films because they brought comic relief from our everyday work. After my service I moved to the US to study filmmaking at NYU Tisch. Then, I stayed in New York to continue develop my career.

My worse restaurant experience is not that bad. When I was backpacking around Europe with friends, we found this small and not so popular restaurant in Barcelona that made the most delicious sandwiches. The service there was so terrible, but it didn’t stop us from coming there every day for the rest of that week, because the food was just so good

JC:If you were Ben in this situation, what would you have done?

I feel like I would have much faster got my ring back from Mike, any way possible. Probably not caring so much if I ruined the engagement surprise for my girlfriend. Then I would explain to my girlfriend what happened. I’m not married, but hopefully if that situation were to ever happen to me, my girlfriend would have found the whole situation ridiculous and funny, and would have forgiven me for ruining the surprise.

JC:What do you like the most about making short films?

I love the challenge of telling stories that impact and evoke emotions in the audience in a very short time. I think it’s not easy to create characters and put them in situations that would makes the audience relate to them quickly and powerfully.

JC:Do you think a situation like the one in Check Please could actually happen?

No. I think that in the real world, an engagement ring can definitely be sent to the wrong table by accident, but I doubt anyone in the real world would decide to go along with the mistake, like the antagonist, Mike does. In certain cases, the audience is willing to accept the film’s reality and logic although they would probably think it’s impossible in the real world. Characters in films can make certain decision and actions that the audience will not question, although they don’t really make sense to do in real life. I think this is the case in my film.

But, the opposite is true as well. I hear and read a lot of stories that happen in real life that audiences would never believe and accepted if those stories were made into movies. In my film I also tried to make sure that there are no logical loopholes in the characters’ goals, needs and agenda. Each character eventually divulge why they made the decisions and actions they did.

JC:What is it about the comedy genre that you like so much?

I think it’s easy for me to come up with stories, scenes and moments that are funny. It’s easier for me to approve them to myself as “good”. With Drama I’m much more critical with myself. My dramatic stories have to be very unique for me to think they’re “good”.  There’s also a great satisfaction when you screen a comedy, because you know immediately if people like and react to the movie, since they laugh. It’s not the same with most other genres, in which it’s hard to know if people are engaged and captivated.

JC:What do you hope to be doing next?

I’m planning to submit the pilot to festivals and try to find distribution for it. The writer/creator of the pilot and I collaborated on writing the outlines of all the rest of the episodes of season one.

Link to a 30 seconds teaser: https://www.youtube.com/watch?v=Lzu8y4uwVIo

JC:How do you feel about being selected for Short of the Week?

I was very excited when I heard about my selection for Short of the Week for two major reasons. Firstly, I follow Short of the Week’s films and they screen only amazing films. This was another confirmation that my film was in that kind of caliber. Secondly, Short of the Week’s platform gets its films a large audience, which is the reason most filmmakers make films, and definitely why I make them.

JC:Is there a genre that you haven’t tried yet you would like to explore?

Although I’ve touched some dramatic projects, I haven’t done anything major in that genre. Lately I’ve been writing and working to develop dramatic scripts that I’m really excited about.

JC:Would you like to make a full feature film one day?

Absolutely. That’s my goal. I’ve already written two features and I’m planning to push them forward and try to make them in the future. I’m also open to collaborating with writers, and directing scripts that I haven’t written. I’ve already directed a short and a TV pilot that I haven’t written. I love the collaboration with writers, as it brings the story and themes to great new levels.

Thank you so much for your time Daniel!