After over 30 years of searching, Henry finally believes he has found the son who was stolen from him at birth during Spain’s stolen babies scandal. Now in London, he is trying to find his long lost son who he believes is Javier. Will he force Javier to reopen this painful chapter of his life, or will Henry leave never knowing his son?

Actor, creator, producer and writer Ashley Tabatabai grew up in Spain and after attending University in the UK, Ashley’s focus gravitated towards an acting career. He has appeared in various independent films, including Allies (eOne Entertainment), featuring alongside Julian Ovenden. His degree in Management provided an opportunity to add value as a producer as well, a role that he undertook on the feature film Digital You, in addition to starring as Charlie. He went on to work on Color Me Grey, where he once again was involved in both capacities, helping to produce the project and performing as the complex and enigmatic Johnny.

Starring alongside Ashley Tabatabai, is the well-known actor Mitchell Mullen, he can currently be seen on television in Sony AXN’s Absentia, National Geographic’s Genius (as FDR), Discovery Channel’s Harley and The Davidsons, and Starz Outlander.

Falsified is Stefan Fairlamb’s directorial debut, Ashley Tabatabai wrote and produced this must see the film, through his production company Taba Productions and the cinematography was created by Adam Lyons. This film is eligible for nomination at the British Independent Film Awards, was selected for the LA Shorts Film Fest and will show under official selection at DC Shorts Film Festival.

We caught up with Ashley to talk about this must see film.For our readers who have not yet seen Falsified, please tell us about the film.

For our readers who have not yet seen Falsified, please tell us about the film.

Falsified is about a man whose son was stolen at birth and now, after many decades, he is convinced that he has found his long lost child. It’s a fictional piece that was inspired by Spain’s stolen babies scandal (Los Niños Robados). It follows Henry who has travelled to London to try and meet Javier, the man who he believes is his son. Javier is very much guarded and keen to move on with his life and leave the past in the past. Henry’s presence instigates a dilemma for Javier, does he keep that chapter of his life closed and stay safe, or risk opening up again on the off chance of truly discovering the truth?

The story is based on Spain’s stolen babies scandal, what made you choose this subject for the film?

Having grown up in Spain, I was acutely aware of what happened and saw a lot of the coverage in the Spanish press. I assumed, wrongly, that most people knew about it. At the time, I realized and understood the draw to the facts behind the scandal. The numbers, 300,000 estimated cases, are shocking. And the way it transpired is so elaborate that it’s one of those “you couldn’t make it up” stories. However, beyond the top level, were stories about the individuals. All the parents and children affected by this. Many who, if lucky enough to connect again, did so decades later. That scenario was intriguing to me, and I felt compelled to explore the human dynamic behind the bigger scandal.

You really command the screen in Falsified, do you think creating your own work enables you to play the characters you desire?

Thank you. I’m a big believer in creating your own content. At the end of the day, we all have stories to tell, so let’s go out there and tell them. Film is a beautiful form of expression, and ultimately that’s what we’re all here for, to express. It is one way of creating characters that you wish to play and of course, that is part of it. However, it would be easy to allow the ego to take over and make it all about you. Whereas the most important thing is the story. I’ll be real, the early drafts of the script did have my character positioned as more of the focal point. However, a few versions in and it was clear that it was even more powerful to switch it and put the focus more on the father. It works, and it is in service of the story. That always takes precedence. 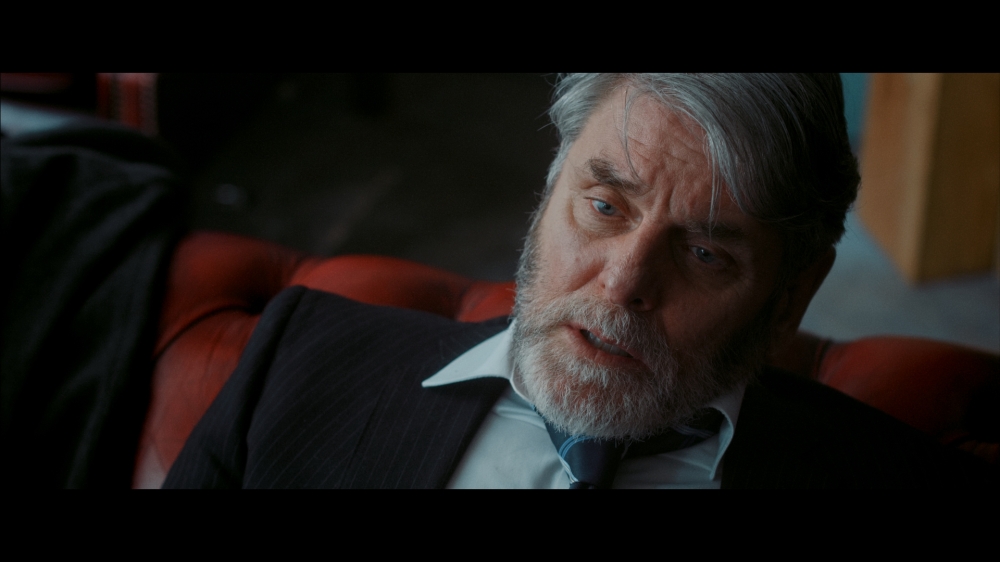 Your co-star Mitchell Mullen is also fantastic, have you worked with him before or did you find him through a casting?

Mitch is amazing, I’m glad you agree. Not surprised though. He was my acting teacher for close to 3 years at AMAW London. I approached him about the role and he was on board before even reading a script. That was a massive honor, given the work he’s done in his career. Mitch, along with the rest of the cast were all fellow AMAW London actors. That was the beauty of the project, Cast and Crew were all people I had worked with before and have a relationship with. Bringing all of them together for the film was like a perfect storm of energies and intentions combining to create what we have.

You film plays like a feature, do you have plans to make it into one?

You know, one of the biggest challenges about writing the short was that there are so many parts of the stolen babies scandal that we could have focused on. So, I actually have a lot of the story that happens before and after the short scribbled down in notes. Eventually, I agree, there is a feature film there and I’d definitely want to explore that. I believe it will happen. However, that is for down the line. At this stage, we’re focusing on the short and enjoying its run. The intention was always to make a short film and to get it into festivals and beyond. That continues to be the aim at this stage. And we’ll then see what happens after that point.

Do you have other films on your slate for Taba Productions?

The feature film of Falsified is on there for down the line. I’m also developing a short called Without Notice with Adam Lyons, who is the DoP on Falsified. We collaborated on a TV Pilot called Color Me Grey back in 2014/2015. And the experience of that and Falsified has really got us into the mindset of creating and collaborating together.

To keep on living. Enjoying every moment as much as possible and really being mindful of creating my own experiences. Within that is obviously creating more films and getting Falsified as much exposure as possible. We want to give it the fullest festival and awards run it can have and then look at some form of distribution thereafter. Beyond that, it’s the life of an actor, I’m grateful to have an amazing agent who gets me great auditions. So, I’ll be busy on that front and enjoy the bookings that come with it.

How do our readers keep in touch with your work?

The best way would be to follow me on Twitter, that’s where I’m most active and vocal about my work: https://twitter.com/AshleyTabatabai

British independent films have a reputation for excellence, why do you think this is?

Performance and storytelling runs deep in British heritage. I think again, it always goes back to story. And the UK has a very broad tapestry of cultures and races all mixing across a very small space of land. From that comes different voices and ideas, and the industry is good at giving them a platform.

What advice would you give to actors just starting out?

I love and loathe this question all at the same time. It can be very cliché and yet the truth is just do it. Don’t hold back, or wonder what if, simply go for it and be patient. It’s the double edged sword, you need to know where you want to go, but enjoy the fact that you’re not there yet. The truth is, no matter what anyone says, you have to have your own experience and find your peace with it. How you do that, is up to you. But, one thing I found helpful is to get clear with yourself. Whatever you want to do, actor, banker, pilot, it doesn’t matter, the most important thing is to get clear on why you want to do it. So that would be my advice to any actor starting out. Find out why you want to be an actor. And go beyond the surface level. How it will make you feel and the lifestyle it might give you are great. But deeper than that, find out how you want your life as an actor to contribute to others.