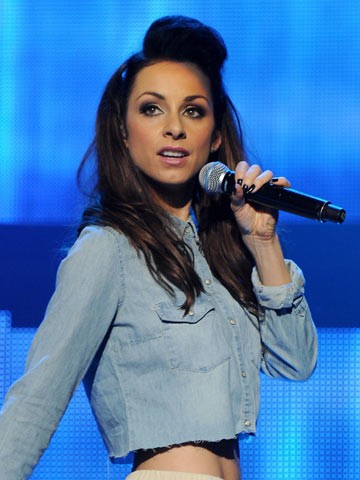 Lindsay Armaou is part of the award winning Pop group B*Witched, not only is she an actress, but a gifted singer and is back on our screens starring in ITV2’s The Big Reunion.    We are going to be catching up with her soon to find out what it is like to be back in the band and how doing so gave her a top 10 hit!

Singer-songwriter Lindsay Armaou rose to fame in the late 90’s, being a part of the hugely popular and successful band B*witched. The Irish pop band took the world by storm, achieving four number 1 singles and selling over 10 million records. They performed on major TV shows all over the world including Top of the Pops and The Royal Variety Show and toured with stars such as Britney Spears, Justin Timberlake and Westlife. After the band split in 2002, Lindsay decided to throw herself into writing and recording her own material and soon joined country folk band Clayton. The beautiful star was invited to reunite with her ex B*witched band-mates in 2013, by ITV to star in The Big Reunion.

To Lindsay’s Joy reuniting with B*witched and starring in the ITV2 reality documentary, ironically resulted in the Clayton album It Was Meant To Be reaching number 6 in the UK’s Country Music Chart. During the show, Lindsay announced via twitter that the album was available for download, and after a few re-tweets, the tweet spiraled, resulting in a great response from fans and the album becoming a high contender in the UK’s Country Music Chart. This beautiful singer along with her fellow B*witched band members helped enable the show to boost the ratings, create a sold out tour and a second much awaited series.

Lindsay’s stunning vocals have also featured on dance tracks including Don’t Go, which reached number 2 on the DJ download chart. As well as being a talented singer-songwriter and musician, Lindsay is also a qualified actress; having roles in Merchant of Venice, Ring Round the Moon, Habeas Corpus, The Cherry Orchard and A Christmas Carol.